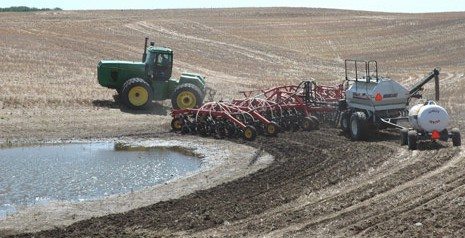 Given the world’s fundamentals for grains & oilseeds, the marketplace will remain fixated on seeding progress and crop conditions for a while, especially with several potential problems: Dryness across Spain, the UK and the Baltics and Ukraine. Add below normal temperatures except in Spain. The US Plains turned drier and warmer, while heavy rain and cold temperatures persisted last week across much of the Midwest and Delta. Canada turned warmer and drier but fieldwork has been relatively slow.

Fund reaction to the events unfolding will acerbate the market moves. Last week, Spec Funds bought about 9 million mt; all in grains and most of it in wheat (7.4 million mt). This still leaves them with a ~-49 million mt grains short.

Prices in Canada have been helped by the Canadian $, which fell close to 72 cents at one point last week. Canola prices went above $11.50/bu and spring wheat prices touched $7/bu in some places on a combination of the weather news and the low Cdn.$.  High ending stocks plus good expected production in the world for wheat, corn and soybeans will limit upward moves, so major spikes like last week’s are valuable pricing opportunities for old and new crop product.